After a year’s preparation, the dominoes finally started to topple again in the Wilhelm-Lückert-Halle in Büdingen on Friday evening - with success! Not one, but two world records were achieved!

Designs focusing on the best things in life
Under the motto “Enjoy Your Life – the Domino Record 2013”, the twelve-member team from Sinners Domino Entertainment designed an exciting domino course that showcased the most wonderful aspects of life.

A new world record with mini dominoes
In the early afternoon, there was already reason to celebrate when 2,000 mini dominoes roughly the same size as the nail on your little finger all toppled as planned to break the first world record of the showcase, beating the previous record of 1,585 mini dominoes. For safety reasons, the audience was excluded from this fragile spectacle given that even the slightest draft would have been enough to send the whole chain of tiny dominoes toppling prematurely.

Other than a television crew from the BBC in England, who were filming for a series on Guinness World Record attempts around the world called “Officially Amazing”, only the official record adjudicator Eva Norroy witnessed the spectacle in person. Together with the notary Kurt Weckesser from Ortenberg, who had previously counted the precise number of mini dominoes constructed, she confirmed the validity of the world record for the British Record Office.

Recaptured: the world record for the largest domino spiral
At 9:43pm on the dot, Wolfgang Naumann, Managing Director of the main sponsor, the bakery Bäckerei Naumann, set off the chain reaction in front of more than 500 spectators. A pendulum attached to the ceiling of the hall swung into the centre of the world’s largest domino spiral to trigger the second world record attempt of the evening, setting the entire chain comprised of a total of 275,000 dominoes in motion. It took a whole 30 seconds for the reaction to begin, but then everything went as planned. Eva Norroy subsequently confirmed that exactly 55,555 dominoes had toppled in the “Largest domino spiral”, breaking the previous record of 50,500 set by a team from Baden-Württemberg. The Sinners Domino Entertainment team therefore reclaimed its title after having lost it at the end of March.

A domino setup with spectacular image transitions The installation was divided up into five different sections: “Enjoying Travelling”, “Enjoying Celebration”, “Enjoying Entertainment”, “Enjoying Sports” and “Enjoying Nature”. The chain reaction was kept alive by playful effects and transitions, all of which astonished the audience, for example when a ball was shot into a goal, smileys were given hats and a model aeroplane flew over an entire section of dominoes. Justin Kühn, one of the team’s builders, also masterminded a unique challenge in which he fished dominoes out of a pool of water to complete a bridge crossing it within 30 seconds. At the end of the event, a sunset domino panorama dazzled with its 25,000 individual dominoes in more than 20 colours. 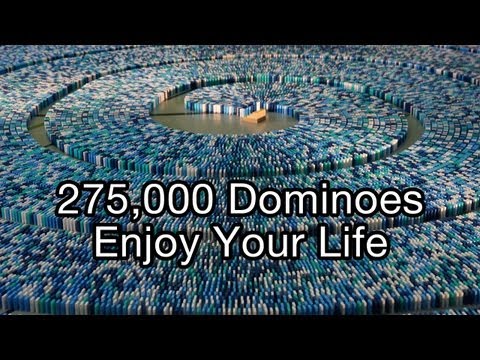 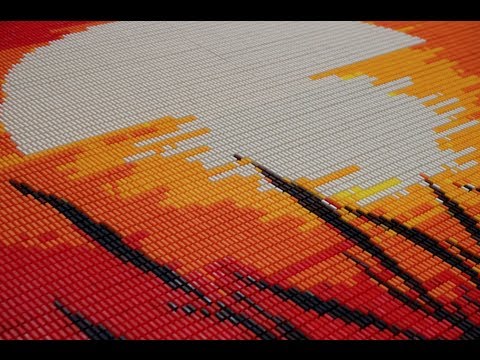 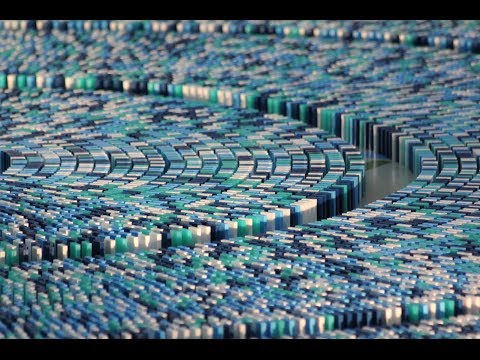 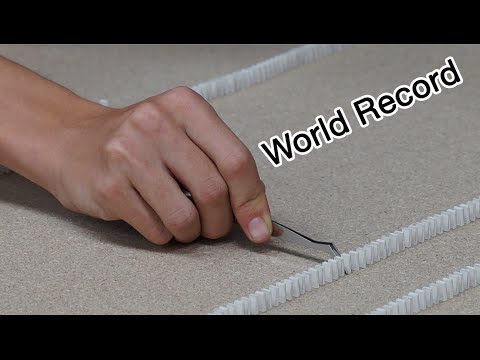