At the German Domino Record 2014 event in Büdingen, Sinners Domino Entertainment was able to achieve not one, but four new records – the German record for the most dominoes toppled in a chain reaction and three spectacular world records.

Germany’s largest domino show
Under the motto “The Year in Domino – a Festival of Colors”, Sinners Domino Entertainment hosted the German Domino Record in Büdingen for the first time. For 14 days, a fifteen-member team worked on what is currently Germany’s biggest domino show and built a setup containing nearly 500,000 dominoes. At 10pm, Rainer Lapp, representing the main sponsor REWE, was visibly nervous as he toppled the first domino to set off the chain reaction. Hopes were extremely high that no other domino would have to be toppled by hand because after all, just one single error could have ruined the success of the German Domino Record.

World record for a circle field
The first row of dominoes to topple led directly to a spectacular world record attempt for the most dominoes toppled in a circle field. A domino circle with a diameter of nearly seven metres and comprised of four different colours formed the heart of the gigantic chain reaction that stretched across the entirety of the 1,200m2-large Wilhelm-Lückert-Halle in Büdingen. The circle portrayed the four main colours of each season. In line with the motto of “A Festival of Colors”, each season was represented by its predominant shade to produce an impressive array of colours in the overall image of the chain reaction: the spring in green, the summer in yellow, the autumn in red and the winter in white. This first world record was broken within no time at all when a ball dropped into the middle of the circle to trigger the collapse of the 54,321 dominoes in just five seconds – immediately impressing the audience right from the word go.

The German record in danger
Justin Kühn, who has been a builder in the Sinners Domino Entertainment team since 2012, was less fortunate in the autumn section. His challenge was to use a pulley system to pull up a moving wooden beam containing a row of dominoes so that it would close a gap in the circuit. Unfortunately, the beam tilted, leaving more than 15,000 dominoes untoppled. For a moment, the German Domino Record seemed to be in jeopardy, especially given the near-disaster that had occurred shortly before the start of the chain reaction, when the Father Christmas in the winter section fell down the chimney too early and set 5,000 dominoes in motion prematurely. Only a makeshift repair ensured that the falling track was able to reach the next image.

Breaking the German record with 472,209 dominoes
Other designs, however, made up for this with their resounding success: Two children battled it out in a snowball fight in the winter section, spring fever was spread by butterflies and hearts and the summer got off to a great start when the decisive goal was scored in a stadium hosting the Football World Cup. When the 45m2-large image of the Sydney Opera House under skies full of glowing fireworks, which was comprised of 81,810 dominoes, toppled, Olaf Kuchenbecker, the record adjudicator from the German Record Institute, immediately started to count the dominoes that were still standing. Together with the notary Kurt Weckesser from Ortenberg, he had already determined the number of dominoes that had been constructed in advance. After an hour came the redeeming news: 472,209 dominoes had toppled and, indeed, smashed the previous record of 435,847, which had been set by a team from Bavaria.

An added bonus: the world record for stacking
The event’s third world record had already been achieved on 12th August during the construction of the domino setup: 1,055 dominoes were stacked on top of a single vertically standing piece. According to the regulations, this stack had to remain standing for over one hour to achieve the record. It actually ended up standing for a total of one hour, 26 minutes and 11 seconds. 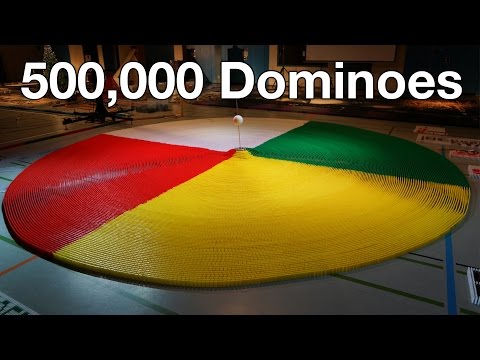 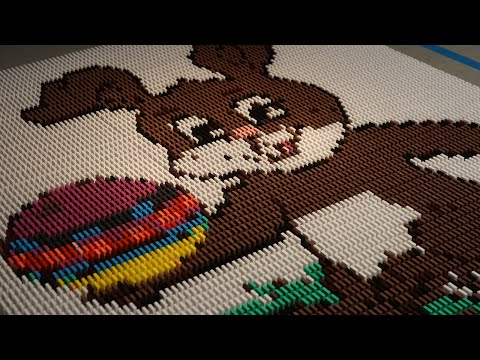 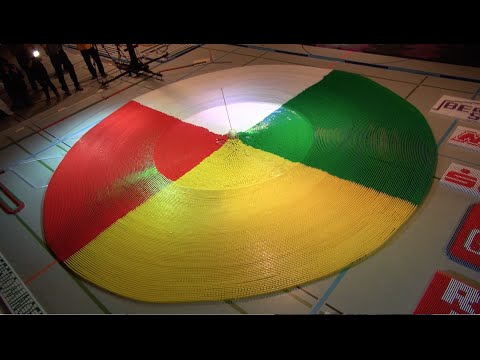