With 543,210 dominoes constructed, the second German Domino Record this year took place under the motto “Dominoland – Reaching the Limit”. After a few starting hiccups, the record attempt was a success.

Upside-down dominoes
It took a total of four attempts for Rainer Lapp from the main sponsor REWE to finally get the chain reaction off to a proper start. This was not due to any errors by Lapp himself but instead the result of the sheer number of limits that Sinners Domino Entertainment had dared to tackle. Even the first row of dominoes was placed upside down so that they would fall headfirst against the laws of physics. Although they ultimately did so, the reaction was halted by a glitch in the transition between the physics-defying stones and the normal standing stones. Olaf Kuchenbecker, the record adjudicator from the German Record Institute and the man responsible for certifying the record results, concluded that the just over 200 ‘hanging’ dominoes at the start must be deducted from the total number of dominoes toppled.

Motifs ranging from Hawaii to Steve Jobs
When the chain finally got off to a successful start, the mood in the hall remained tense, for a single break in the chain elsewhere would now have put paid to the attempt to achieve a new German record. The dominoes, on the other hand, reliably continued on their journey, depicting a sunset in Hawaii, climbing through a jungle temple and conquering the Antarctic. Even Edward Munch’s famous painting “The Scream” was a manageable challenge, with every one of its dominoes falling off the specially constructed, more than three-metre-high vertical canvas. Justin Kühn, who has now been a builder in the Sinners team for three years, was able to successfully place a row of cereal boxes as alternative dominoes live before the chain reaction reached them. This feat enabled the team to add an impressive total of 15,000 more dominoes to its overall result.

Three world records achieved
The diverse and colourful motifs created by the team enabled it to achieve not one, but three new world records: “Most dominoes toppled underwater” (11,466), “Largest 2D domino pyramid” (120 layers) and, as the grand finale, the “Largest domino portrait”, which covered an area of 72 square metres, consisted of 150,174 dominoes and depicted the Apple founder Steve Jobs, who had died four years previously.

700 excited spectators in Nidda
The audience was also extremely impressed. More than 700 spectators had come to the Mittelstufenhalle hall in Nidda to see the spectacle. The guests included the CDU Secretary-General, Dr Peter Tauber, who praised the work of the team as “incredibly creative precision work”. The show was also attended by the Mayor of Nidda, Hans-Peter Seum (independent), and his Kefenrod counterpart Rudolf Kessler (CDU). Thanks to the support of Nidda Town Council and Mayor Seum, the event was able to be relocated to the local gymnasium at short notice after the venue in Büdingen was unavailable due to refurbishment.

A German record with 537,938 dominoes
Only quarter of an hour after the last domino had toppled, Kuchenbecker, who was responsible for counting the final result alongside the notary Kurt Weckesser and notary representative Christoph Duchardt (both from Ortenberg), announced a new German record for the “Largest domino chain reaction” with a total of 537,938 dominoes toppled. For the first time ever, a German Domino Record had therefore exceeded the half a million mark after achieving a total of 472,209 dominoes toppled in the previous year. 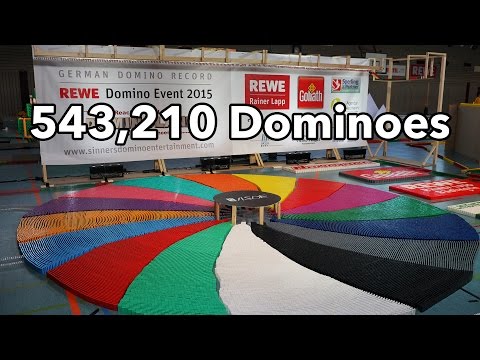 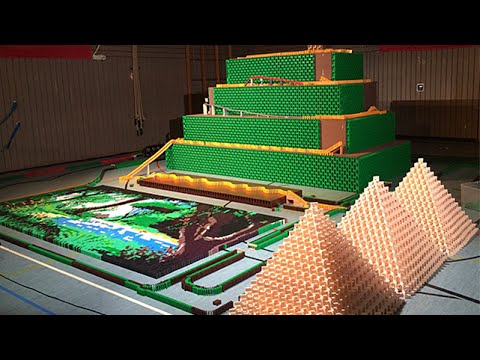 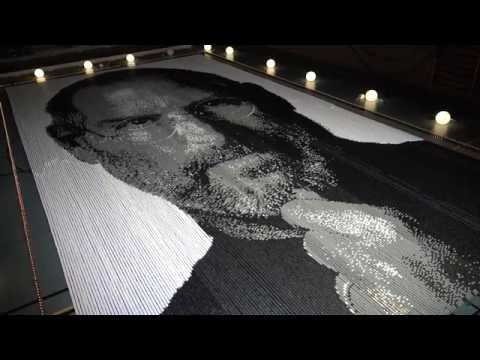