Yesterday evening, half a million dominoes toppled under the motto “World of Art – Experiencing Domino Entertainment”. The event also celebrated not one, but two world records.

The largest chain reaction of the year in front of 700 spectators
At the German Domino Record 2017 event, the team from Sinners Domino Entertainment successfully triggered the world’s largest chain reaction of the year 2017. The Mittelstufenhalle venue in Nidda was absolutely packed with spectators and provided a very special atmosphere for the spectacle. Despite the presence of over 700 spectators, there was one single moment in which you could have heard a pin drop, namely at 9:50pm, when the event’s main sponsor, Rainer Lapp, set the first domino in motion.

Despite a hiccup: world records with a circle field and pyramid
Only a few seconds later, the first world record of the night had been achieved: 80,432 dominoes became the “Most dominoes toppled in a circle field” and broke the existing record of 76,017 dominoes, which had been set in America in the previous year. Pyrotechnic fountains and streamers shot into the air to celebrate this achievement but one effect was misaligned and knocked other structures. While the spectators held their breath, fearing a premature end to the record show, systematic intervention and quick repair work enabled the issue to be rectified within just a few minutes so that the chain reaction could continue. Shortly afterwards, the second world record was broken, namely that of the “Largest 2D domino pyramid”, which reached a height of 3.024 metres and incorporated 8,001 dominoes. This was the first time that such a structure had reached a height of over three metres. The previous record from 2015 stood at 2.88 metres and contained 7,260 dominoes.

Pyrotechnics and the Builders’ Challenge
Pyrotechnic effects spectacularly accompanied the dominoes as they toppled, for example in the domino portrait of Leonardo Da Vinci’s “Mona Lisa” and the three-metre-tall Chinese temple built using more than 30,000 individual dominoes. The ‘Builders’ Challenge’ was also a success: Justin Kühn handled the pressure perfectly as he closed a connecting line in the middle of a domino labyrinth and cleared the way for the chain to reach the wall of dominoes behind him. With his mission accomplished, Kühn accidentally knocked about 30 dominoes with his foot when leaving the labyrinth, but they thankfully all toppled in the right direction.

An emotional roller-coaster
According to Patrick Sinner, the organiser of the event and Manager of Sinners Domino Entertainment: “Words can barely describe what happened in Nidda this evening. A packed-out hall witnessed a true emotional roller-coaster in which two world records were broken and all dominoes ultimately toppled as planned. No scriptwriter could have come up with anything more dramatic than this.”

An extremely exciting and entertaining event
The CDU Secretary-General, Dr Peter Tauber; the Mayor of Nidda, Hans-Peter Seum (independent), and his Kefenrod counterpart Rudolf Kessler (CDU) all congratulated the 18-member team and commended its work, referring to its remarkable finesse in creating a highly impressive, exciting and entertaining event. 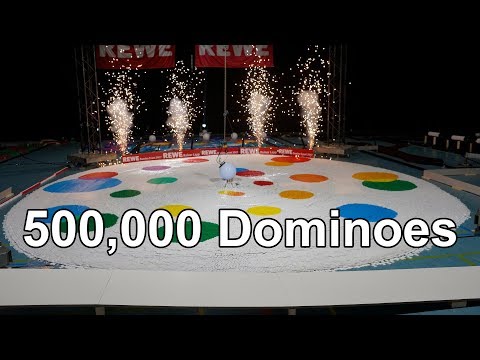 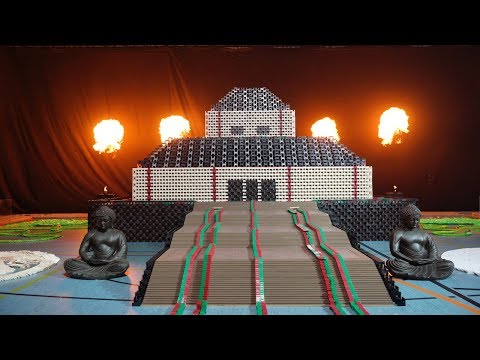