The world's biggest domino shows of the past decade

With 2,143,210 constructed dominoes, impressive pyrotechnic effects and breathtaking lighting scenarios, the German Domino Record has set new standards as the world’s biggest domino show of the past decade! At the four exciting events held to date, we have impressed millions of fascinated spectators and achieved a total of eleven official world records recorded in the Guinness Book of Records. Over the years, we have continuously added dominoes to our targets and not only achieved more tension and excitement but also provided more thrilling and nail-biting highlights thanks to increasingly complex designs and extraordinary effects.

The German Domino Record 2018 was an extra-special event for us as it also represented our tenth-anniversary celebrations, held under the motto “Celebrating Anniversary – 10 Years of Sinners Domino Entertainment”. At this elaborate anniversary show featuring our most spectacular designs and effects to date, nearly all of the 600,000 dominoes in the setup toppled in a single connected chain reaction.

We also succeeded in breaking not one, but three world records: the largest domino spiral, the largest domino cube and the longest domino wall. The event venue, a hall covering an area of 1,200m2, was converted into a modern TV production studio especially for the show. 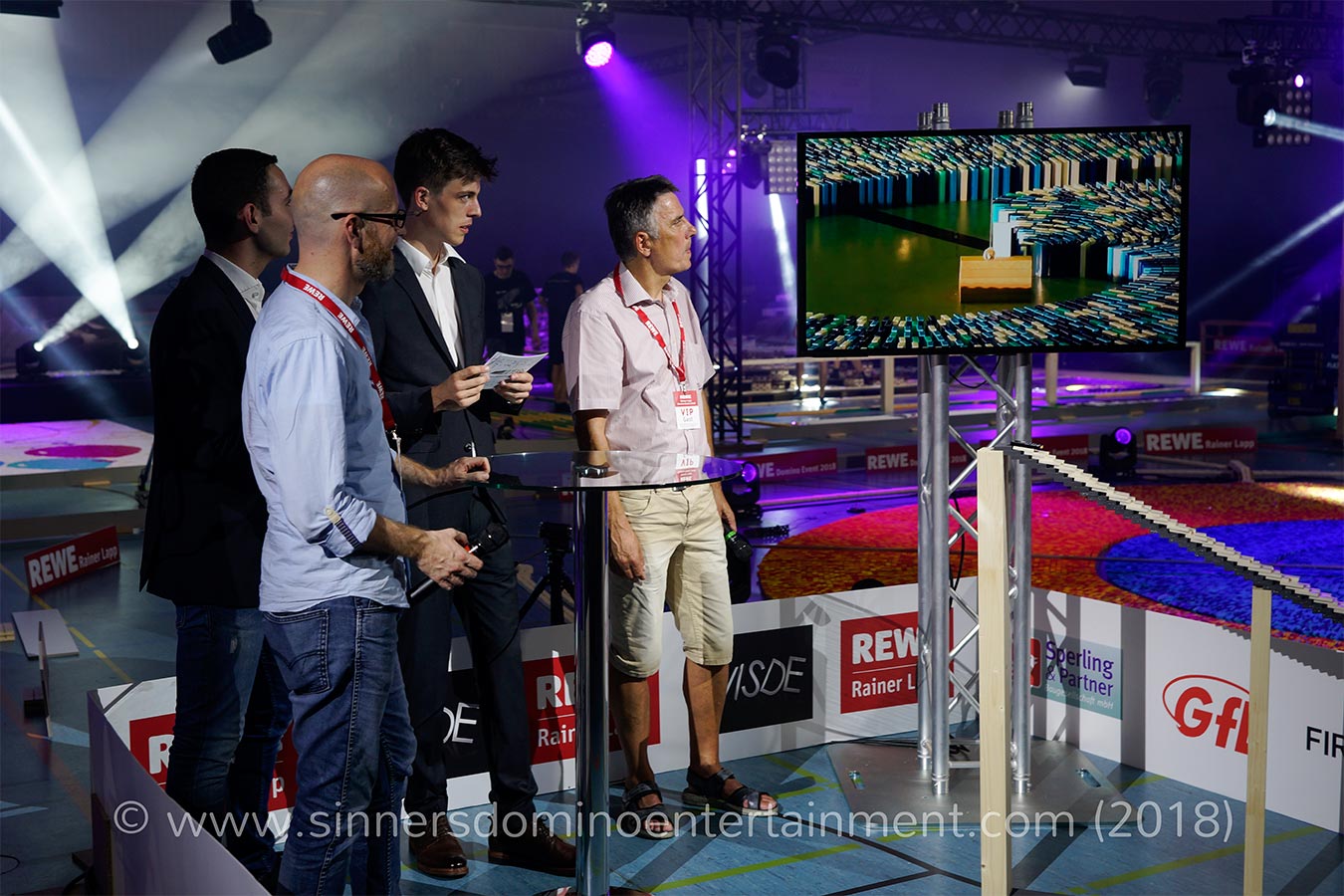 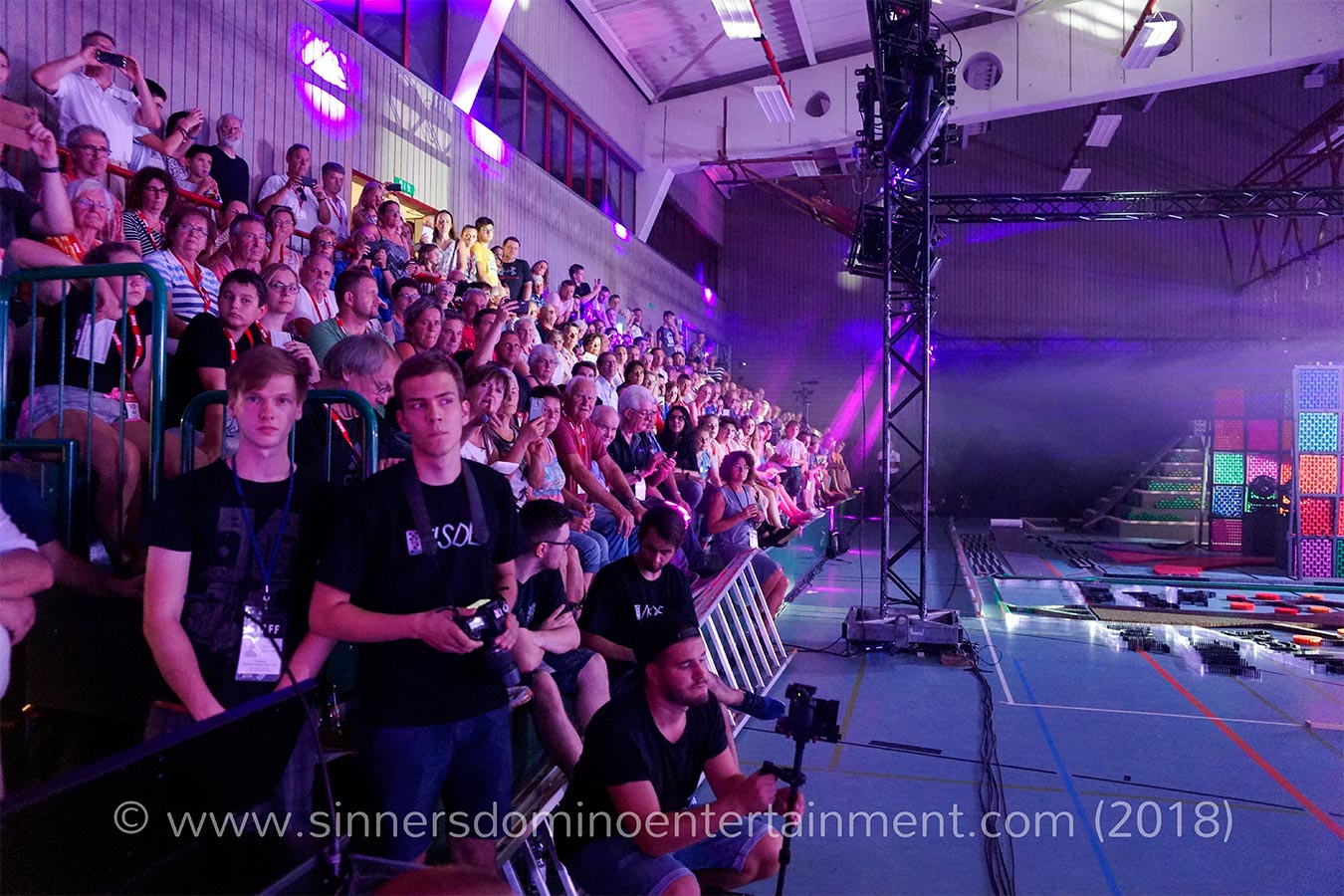 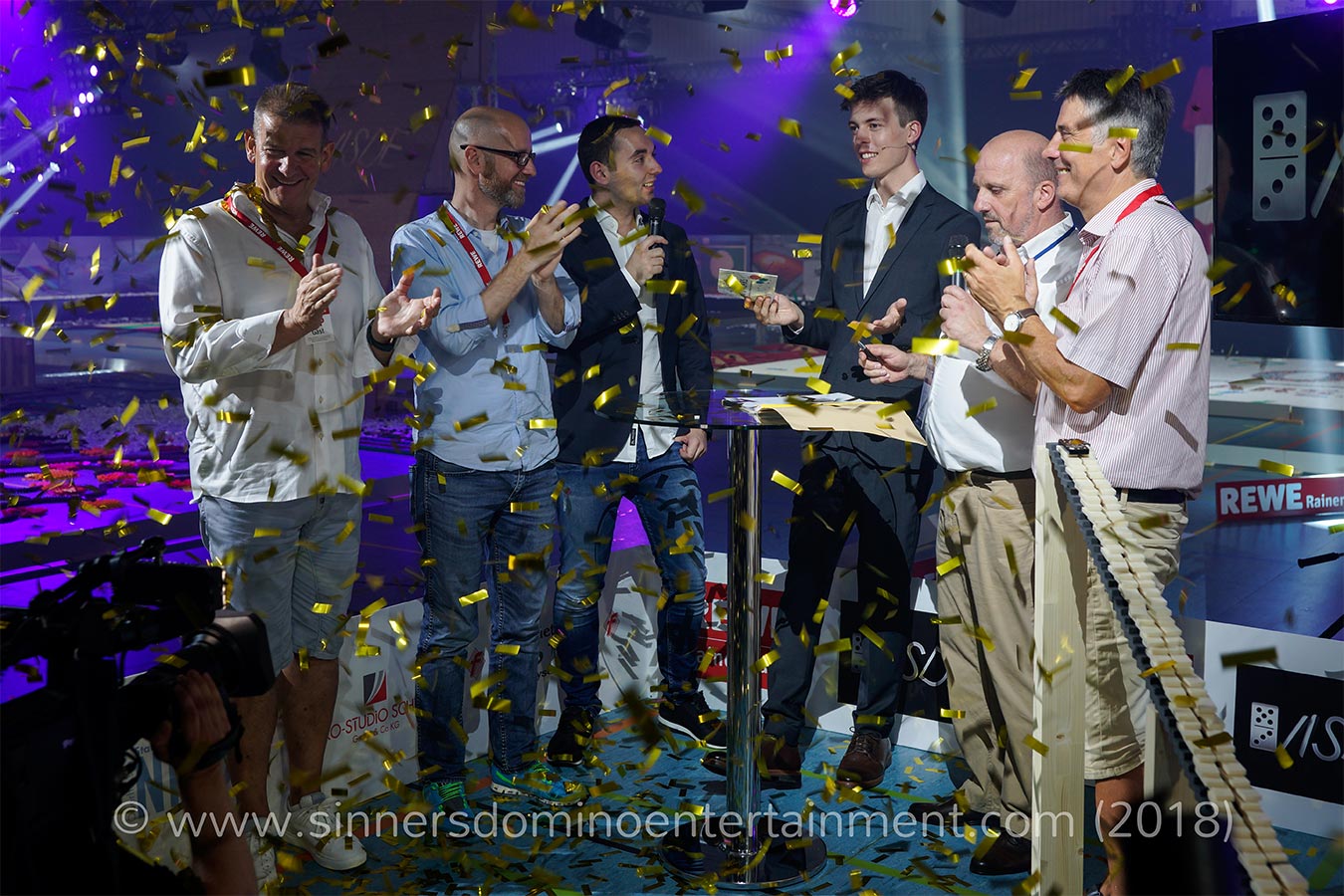 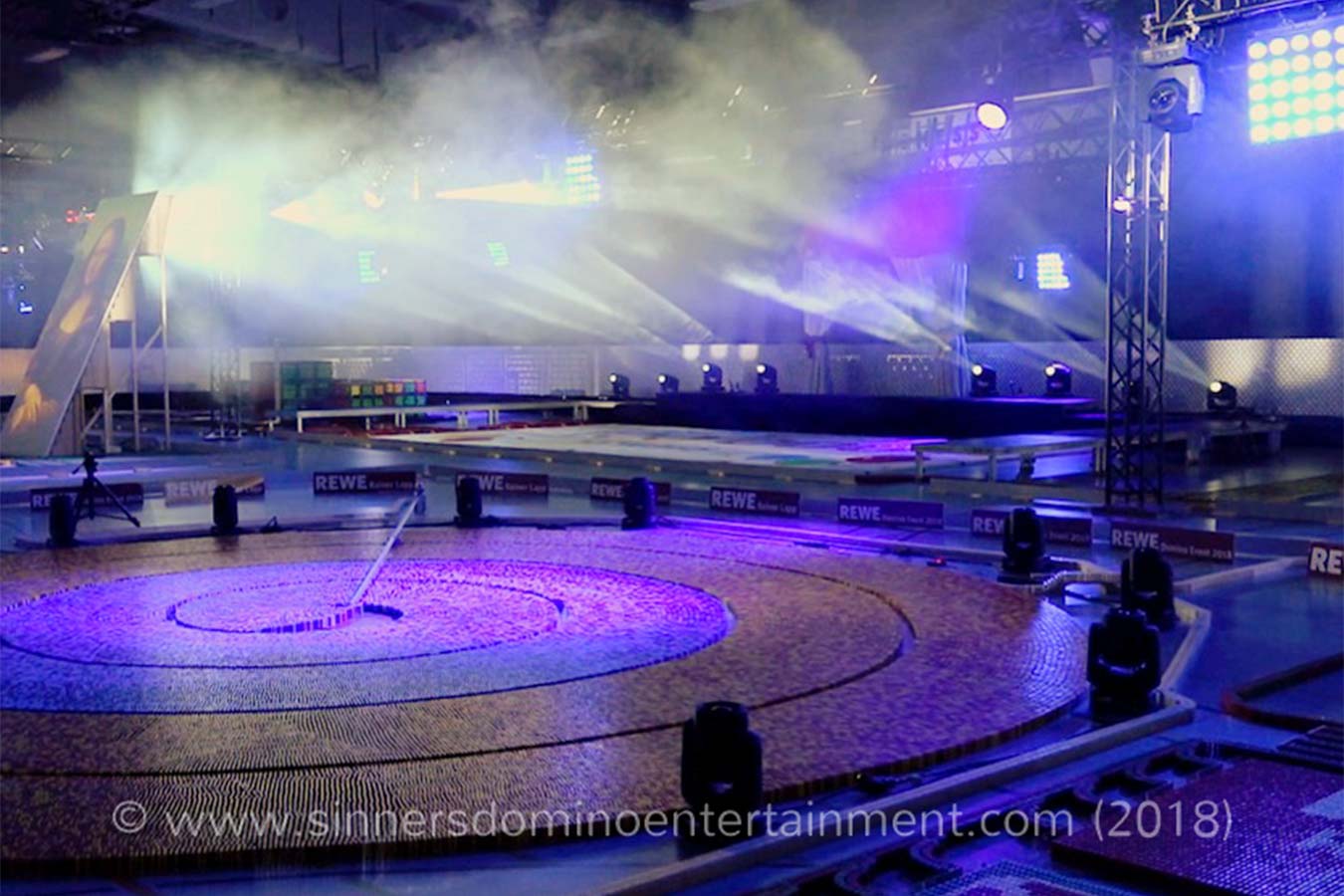 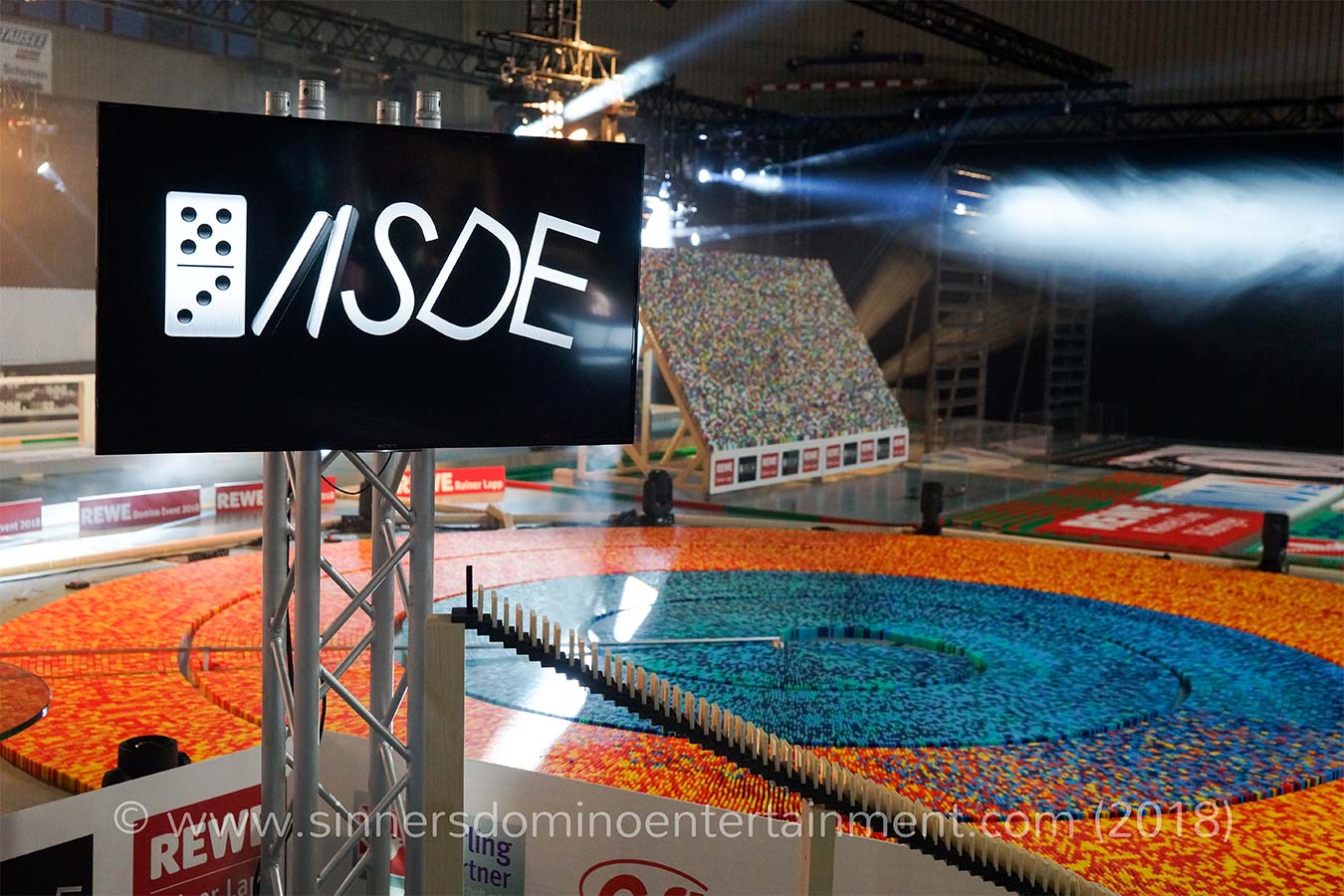 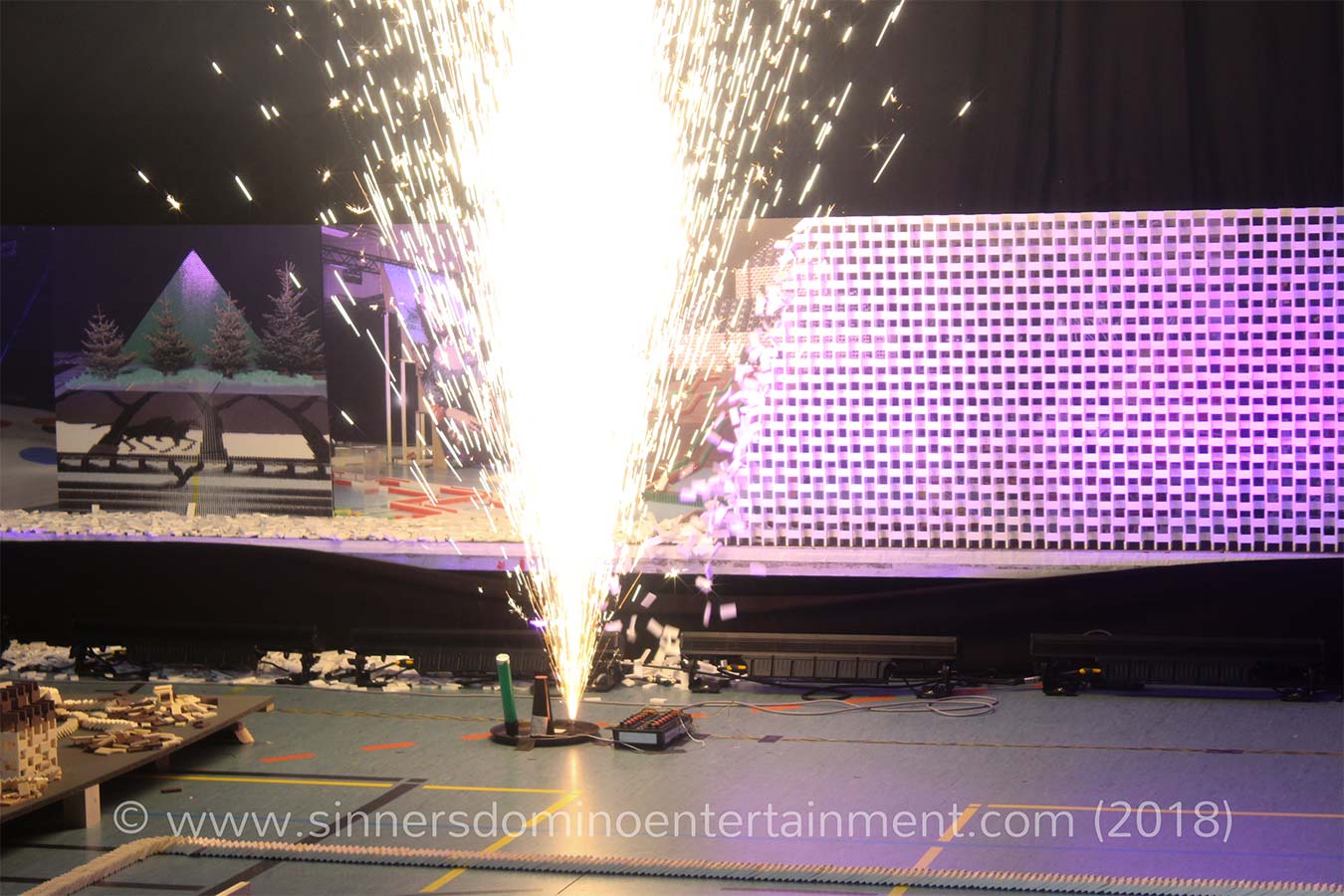 If you were to take 596,229 dominoes and line them up, they would cover a distance of 10 kilometres. In a stack, they would reach a height 3.5 times that of Mount Everest and when they toppled in a spectacular show, they smashed the German record for the most dominoes toppled in a chain reaction. Our team of 24 members spent 16 days working meticulously on the setup for the German Domino Record 2018.

Calibrated high-precision scales recorded every single domino placed before the notary Richard Trunk determined the official record number of dominoes toppled and formally declared it to be a new German record on the evening of the show.

325 metres of truss, 141 spotlights and several kilometres of cable were used to transform the large sports hall in the German town of Nidda into a modern production studio. Stage curtains with a surface area of more than 700 square metres helped to create the perfect overall setting. In the weeks leading up to the event, our event technicians had already developed a lighting design tailored to complement the domino design and provide both a spectacular show atmosphere and impressive footage.

The actual challenge, however, only started shortly before the show itself: ten tonnes worth of event technology had to be installed in a hall containing more than half a million constructed dominoes – without causing any of them to topple. This huge technical achievement was topped off by an audio system adapted to suit the fragile setting, pyrotechnic effects and video projections integrated into the chain reactions that changed the domino designs in real time. 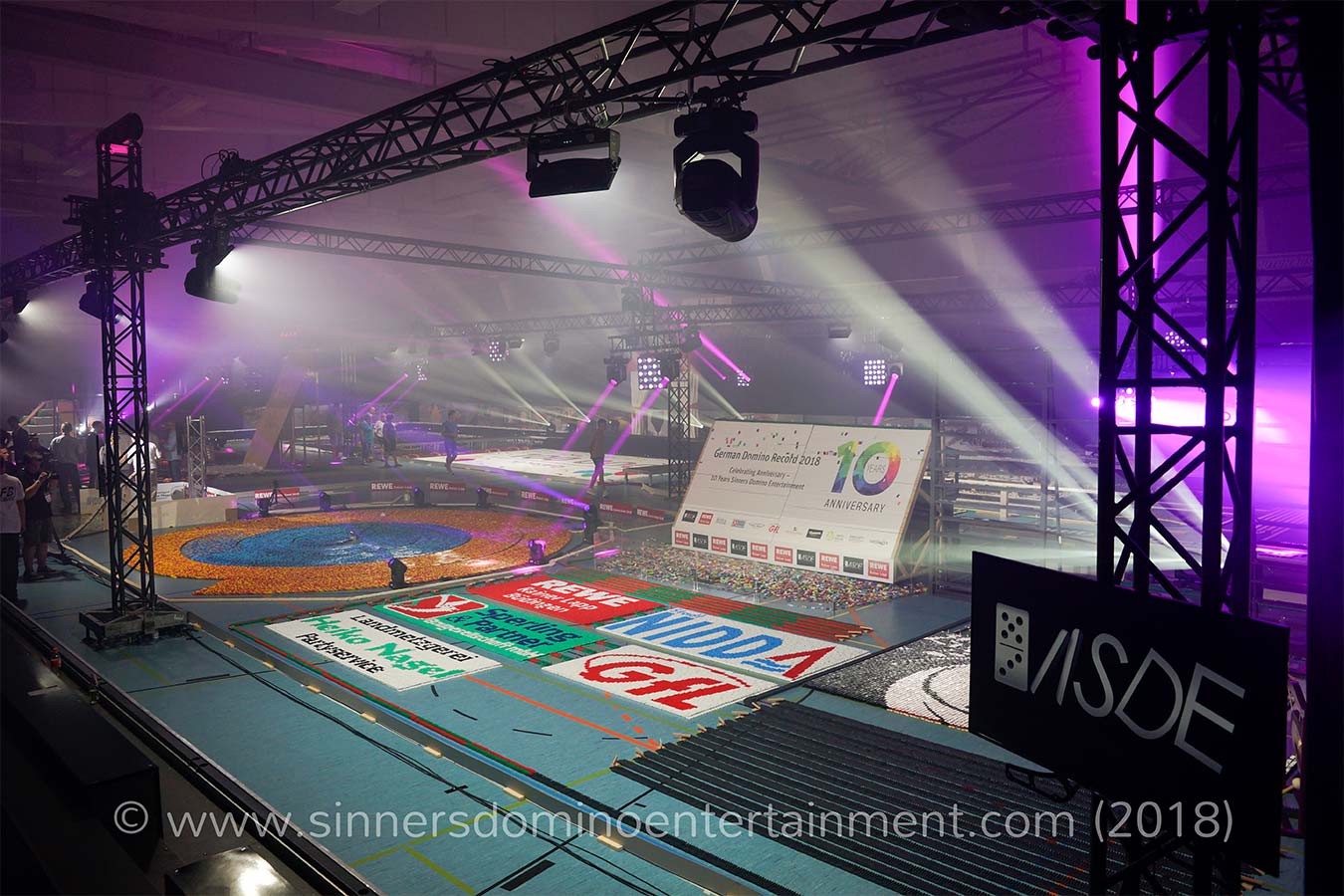 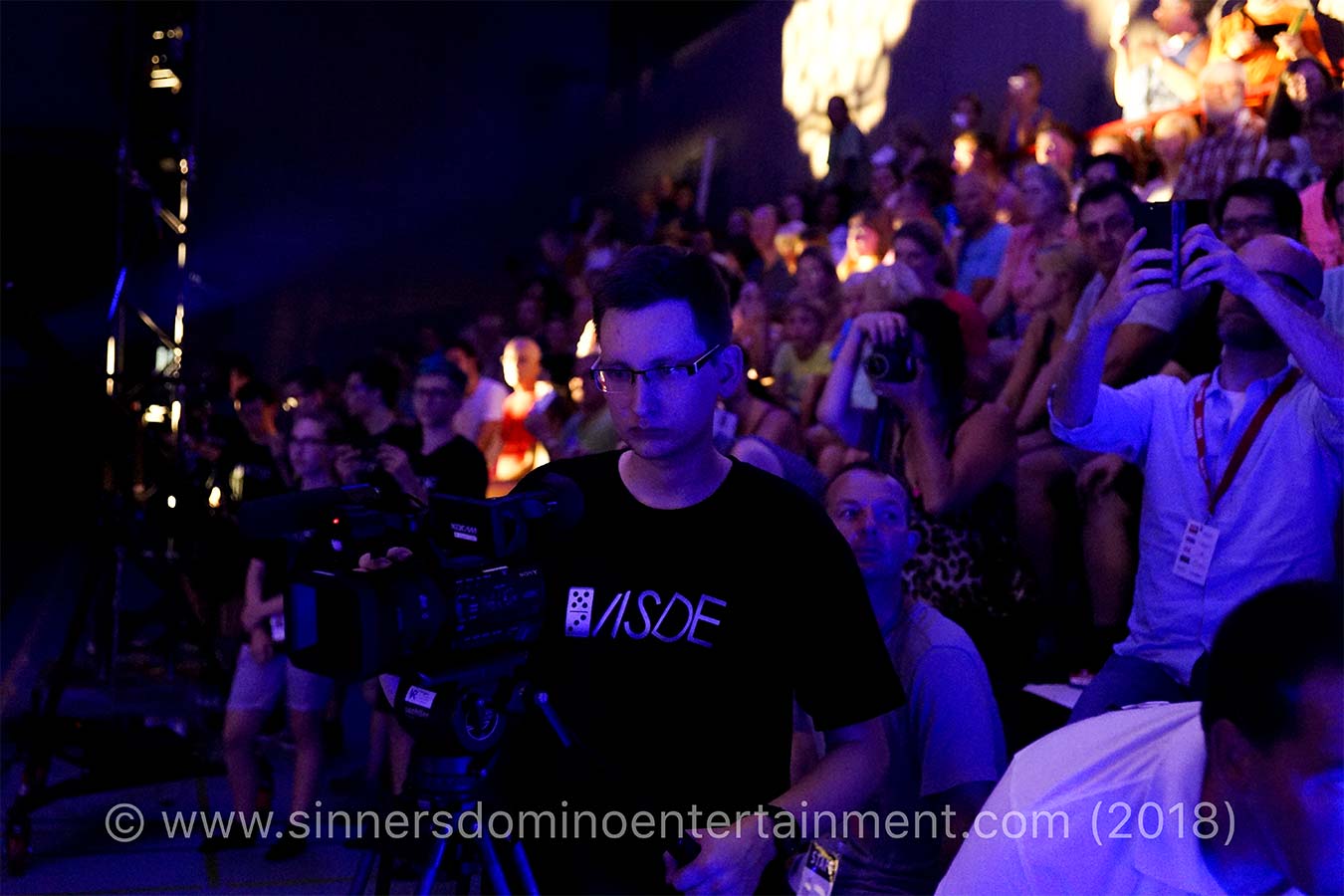 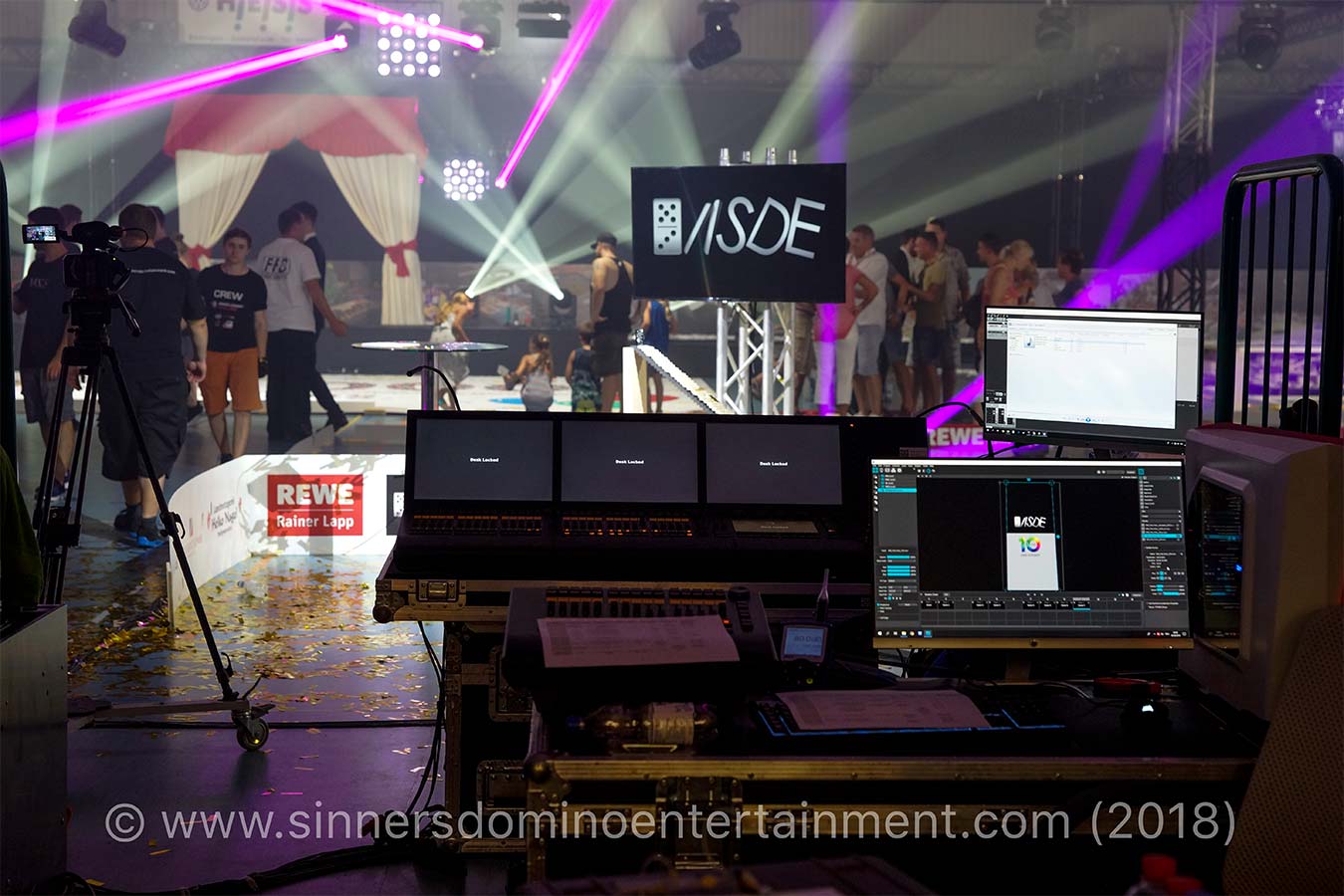 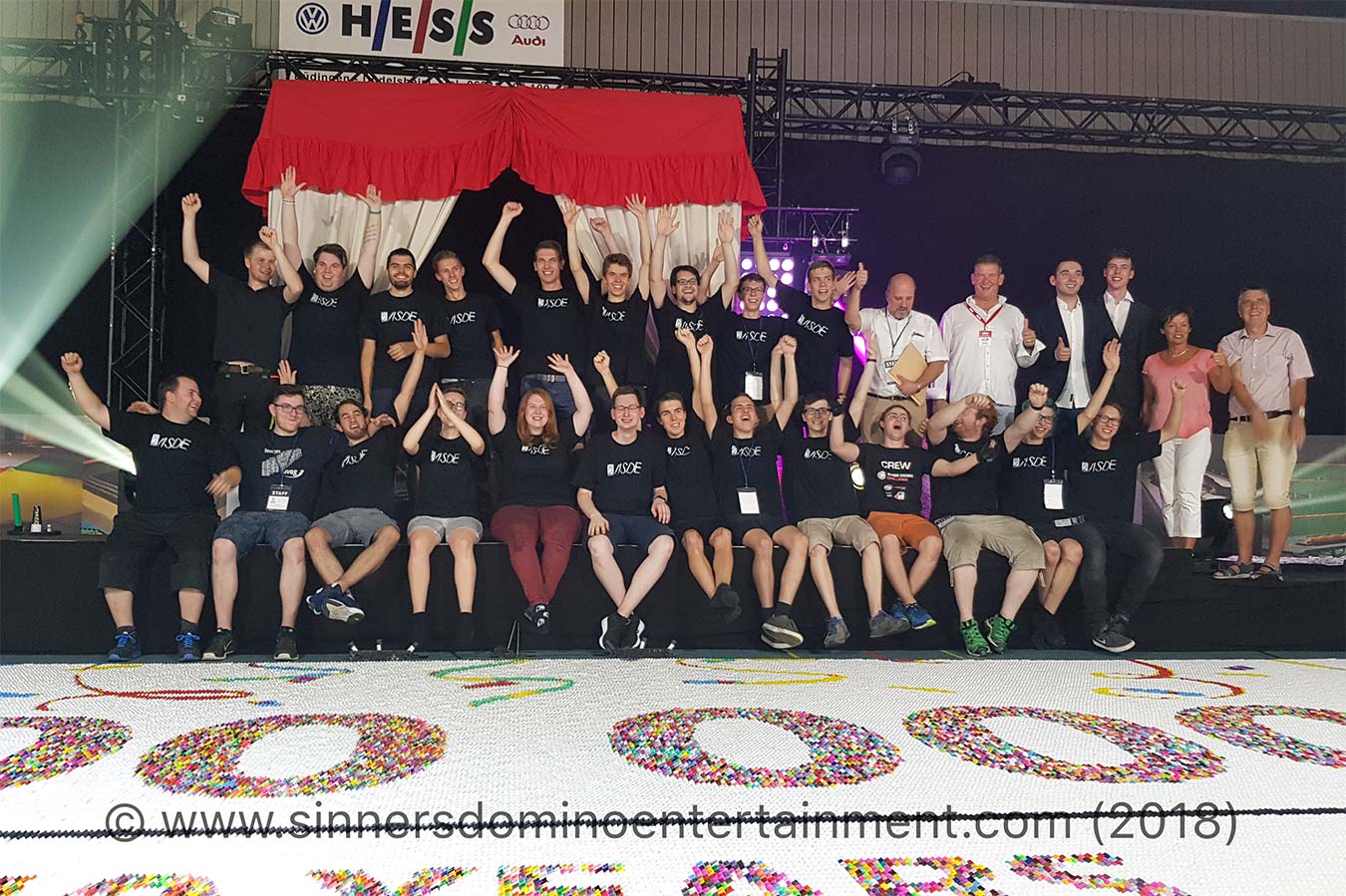 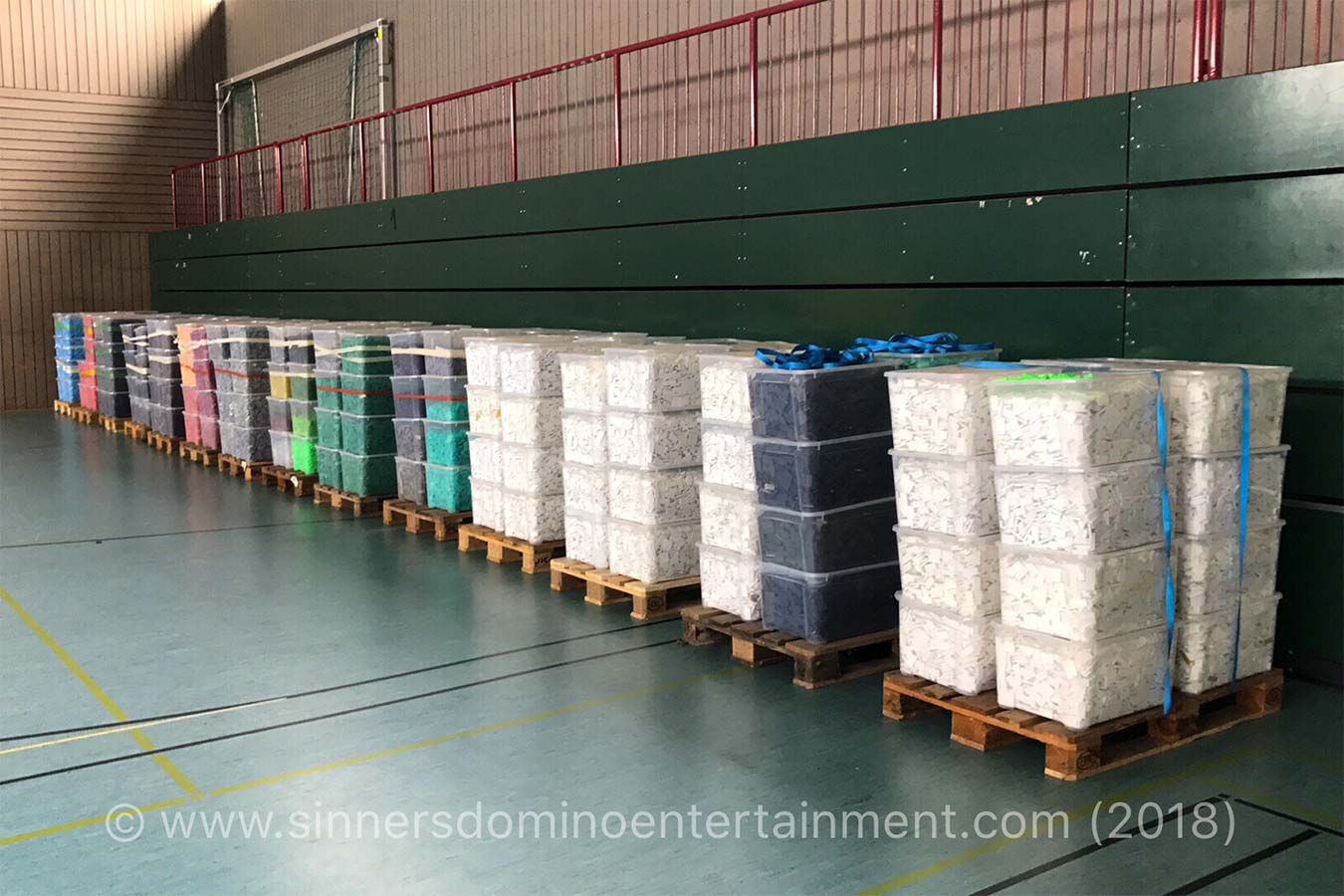 The German Domino Record 2018 not only involved seven tonnes of dominoes but also more than 300 square metres of wood, a mobile carpenter’s workshop, more than ten tonnes of state-of-the-art studio technology and an abundance of fixtures and fittings, including highly sensitive self-designed constructions for the domino effects. Calculating material quantities on this scale and coordinating their delivery in a total of seven lorries, as well as managing the crew members involved, represented a major logistical challenge.

In fact, the production work took a total of 400 working days – all for the end result of a 90-minute-long show and 15 minutes of truly unique domino entertainment!

As early as sixth months before the first domino was placed in Nidda, a planning team of five members started work on developing the domino designs. Image by image, we determined the precise positions, quantities and colours of the dominoes required. Only once this stage was complete were we able to put together the entire chain reaction in a digital hall layout. We did so by working with a computer program that we developed ourselves especially for this purpose.

Individual setups, walls and 3D domino buildings were designed as 3D renders with assembly instructions so that we could already visualise the future design in the hall during the planning phase. 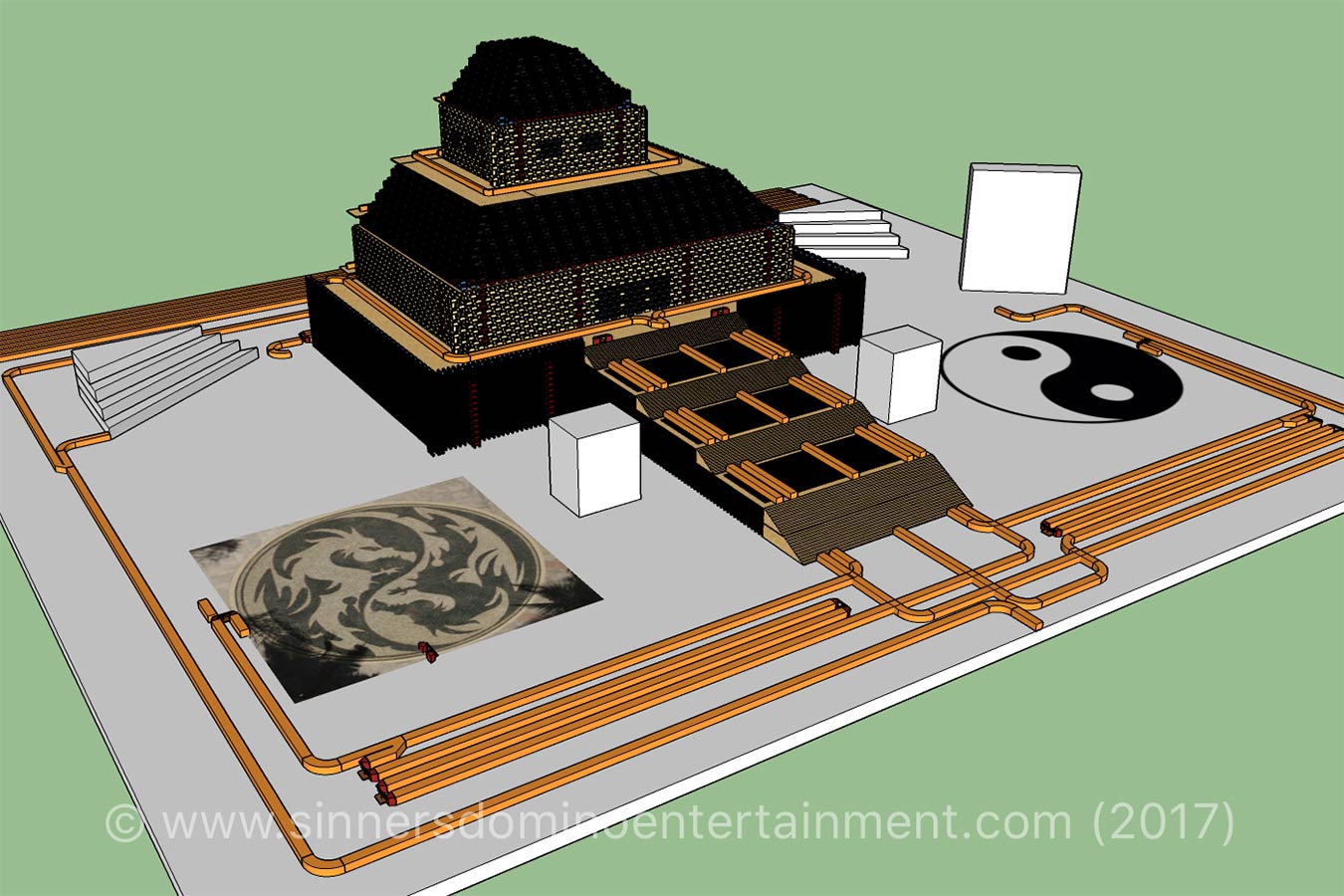 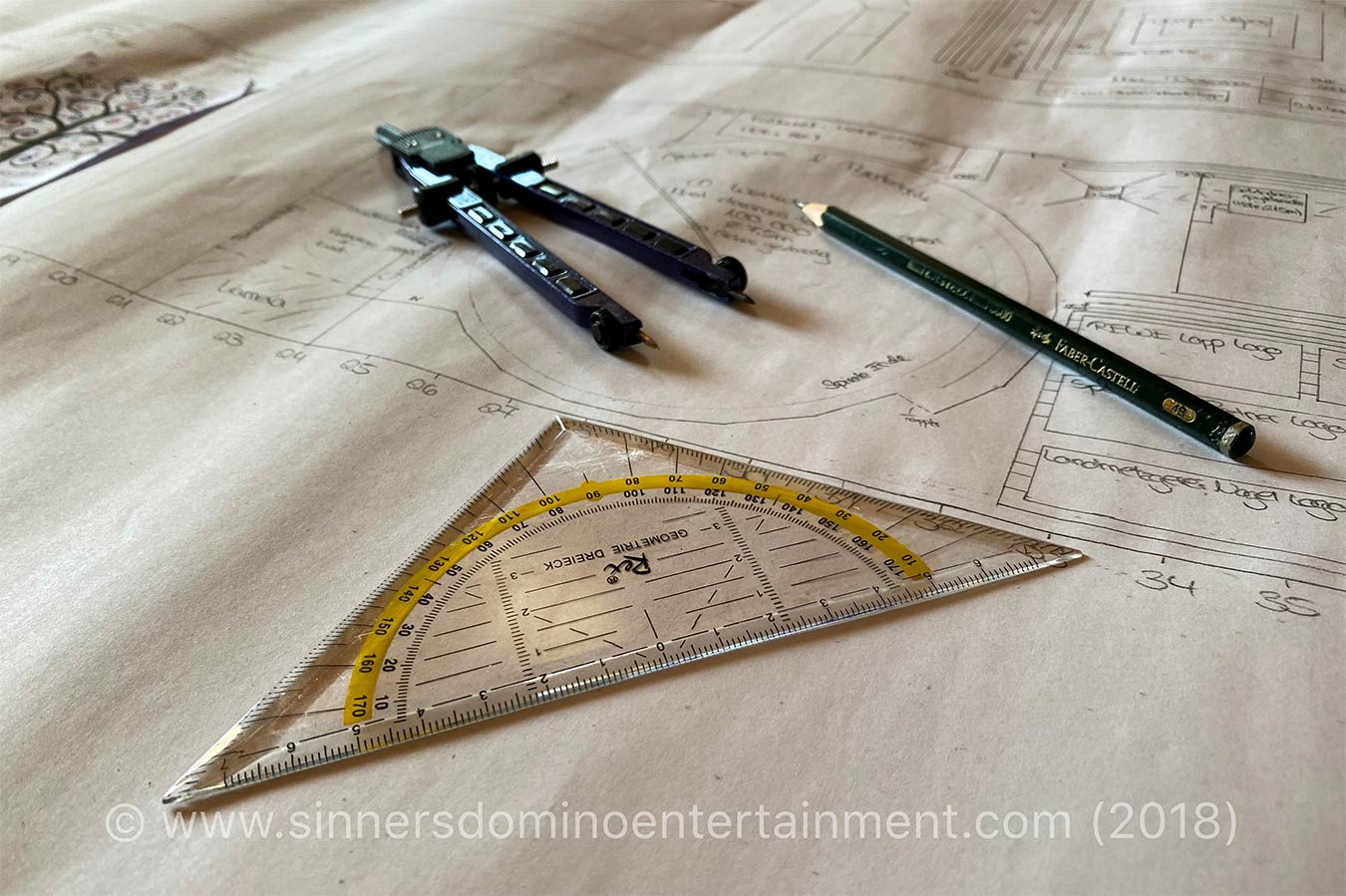 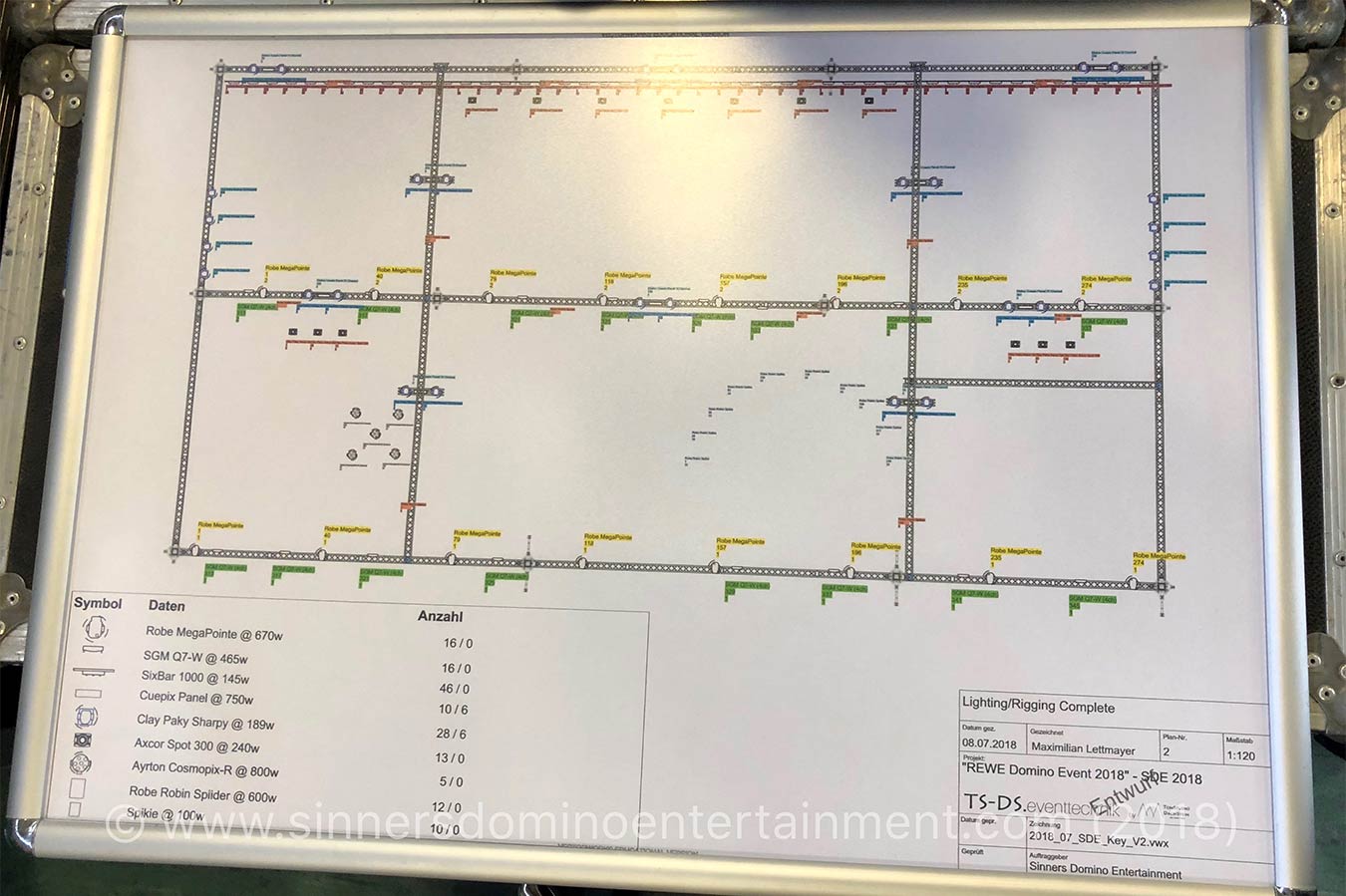 At the third German Domino Record event, which was held in 2017, 500,000 dominoes toppled. Our show additionally broke two Guinness world records: for the most dominoes toppled in a circle field and the largest 2D domino pyramid.

The event was held under the motto “World of Art – Experiencing Domino Entertainment”. It showcased designs from the world of art, for example the Mona Lisa by Leonardo da Vinci, and also explored cultural and architectural aspects with setups such as a temple landscape inspired by locations in the Far East. What’s more, pyrotechnics and fire effects were used for the first time to provide top-quality domino entertainment. 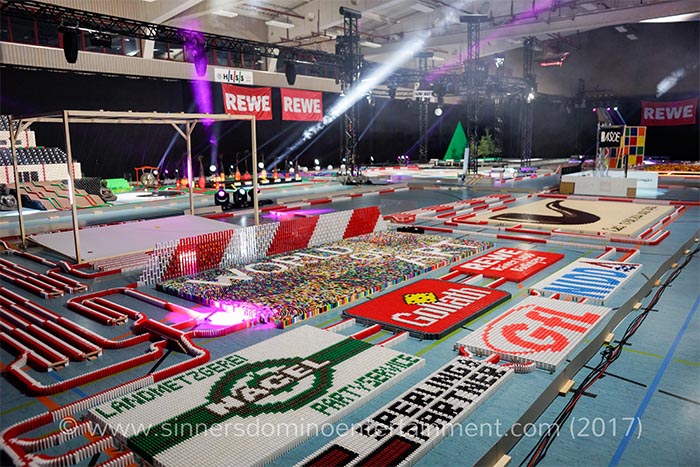 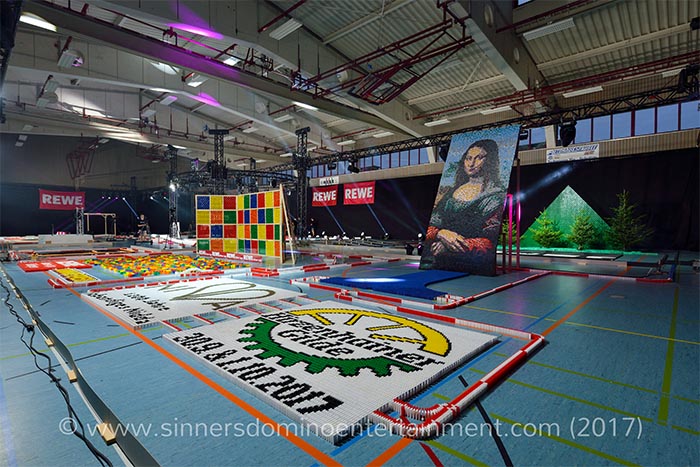 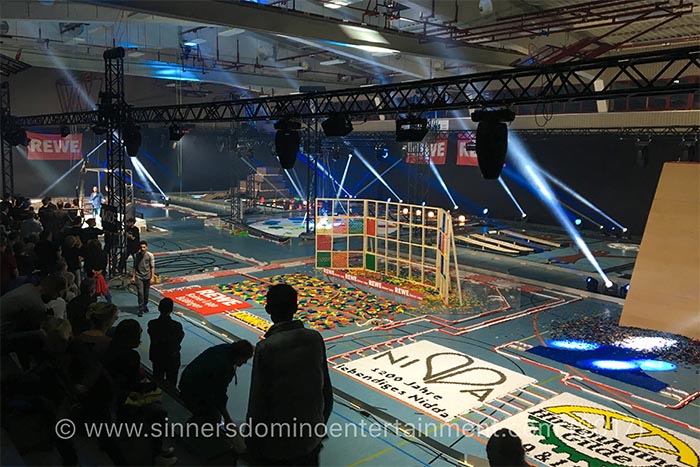 In 2015, 537,938 of a total of 543,210 constructed dominoes toppled at the successful second German Domino Record show. At this record-breaking event, we were able to achieve an impressive tally of three Guinness world records: for the largest domino portrait, the largest 2D domino pyramid and the most dominoes toppled underwater.

In line with the motto of “Dominoland – Reaching The Limit”, the show featured designs from all over the world, from a Hawaiian sunset through to a jungle landscape and right through to the Antarctic, all with elaborate domino effects that aimed to overcome all kinds of physical limits. 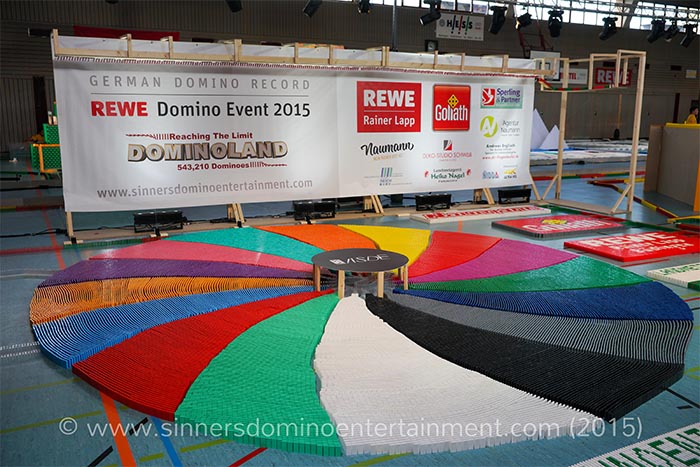 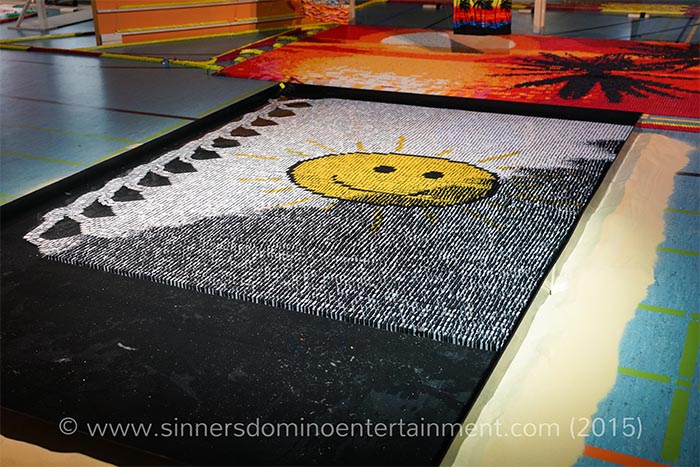 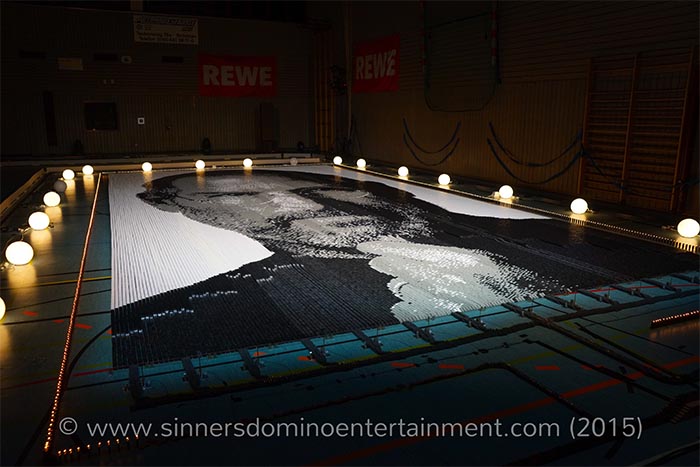 To reflect the motto of “The Year in Domino – a Festival of Colors”, we used designs depicting all four seasons – from the Easter Bunny and blossoming flowers in the spring, hot days at the beach with cocktails on the sand and rainy autumn days right through to an icy snowball fight in the winter. 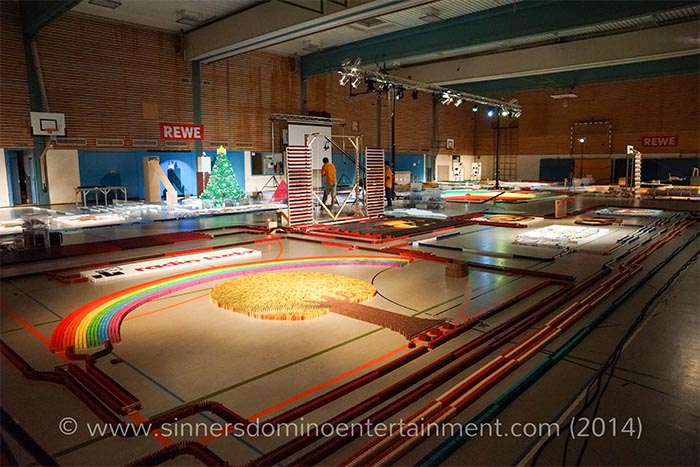 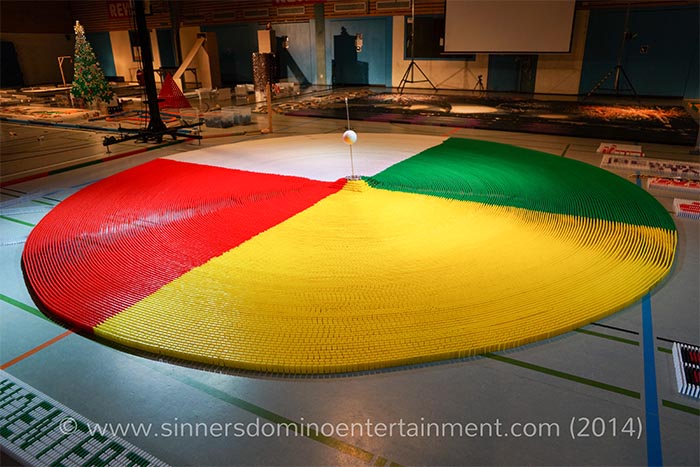 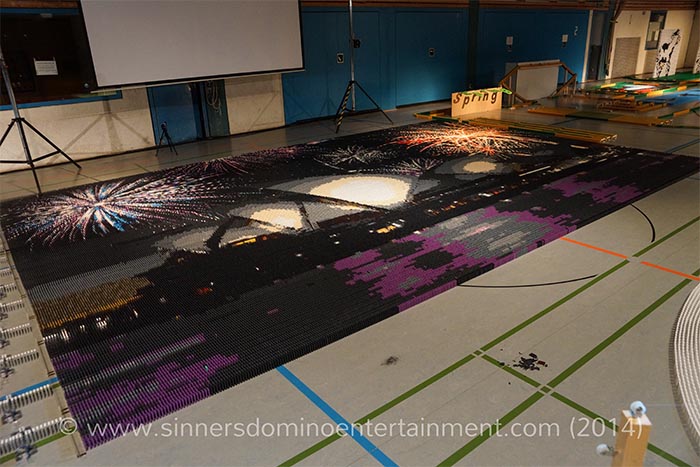